On October 7th, the club celebrated its 80th anniversary.  Members past and present came along to celebrate and remember the clubs rich heritage.

The evening included a showcase of Squash memorabilia and photographs along with an exhibition match between former PSL team members. 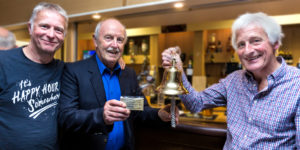 Chairman Mike Taylor opened the evening with a speech of the clubs history.  He said “I have been absolutely delighted by the response from members to this evening’s event, which I interpret as a reflection of your fondness for and pride in belonging to this special Club.

In putting together the memorabilia which is displayed on Court 2, and which I hope triggers memories, I have been reminded of the rich heritage of the Club, and of the succession of members who have made such a contribution to establishing the Club as it is today. 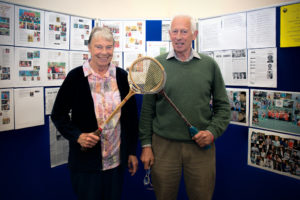 In 1936 there were only three squash courts in Derbyshire, 2 at the Palace Hotel Buxton, and 1 at Normanton Barracks.  In 1937, Leslie Woolley, along with Keith Thomson, brought squash to Duffield. ‘Squash is undoubtedly the coming game’ wrote Keith in his appeal for members, and how right he was.  Court 1 was built in 1937 to SRA specifications, with a kitchen and boiler room downstairs, and an enlarged balcony overlooking the Court.  There was a separate wooden pavilion for changing.  Court 2 came into operation in 1973, and with it a major increase in membership.

In 1978, land purchased from the former adjoining garage site, enabled plans to be prepared for Courts 3 and 4, a kitchen and dining room area, and a multi-purpose room above. The development was completed in 1970. 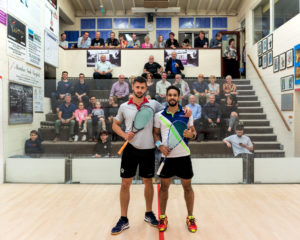 1981 saw a beer store and office added.  In the year the Club celebrated its Golden Jubilee, 1987, a scheme for re-structuring the existing Clubhouse to provide for a glass back court, and to improve lounge and changing room facilities was put forward.    After overcoming initial objections, planning consent was granted, and the project  commenced in February 1990.The glass back court, now Court 3, and enhanced facilities were opened by  Jonah Barrington on 2nd February 1991.

As you will appreciate, the events outlined do not occur without the enthusiasm, drive, commitment and hard work of individual members, and since its inception the Club has been blessed by a succession of such  people.

Denys Hope became Secretary in 1943, and elected a Life member in recognition of his 49 years as an officer of the Club. Court 1 is dedicated to his memory.  Court 2 is dedicated to Clive Wildsmith, a stalwart of the Club and its President for 27 years. 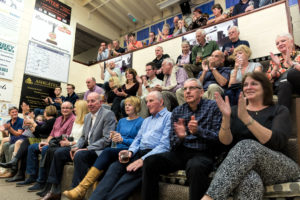 Duncan Graham has a plaque in the lounge for 30 years service as Bar Manager.  The plaque on our show Court 3 rightfully belongs to John and Pauline White. Both served on the Committee for three decades and spearheaded both the development of the Club and its playing activities.  Both were very distinguished players. John was awarded an MBE for services to squash. Pauline was the first Chairman of the National WSRA Coaching Committee, a post she held for 17 years, with a coaching scheme she introduced to the Club being replicated throughout the country. How fortunate Duffield Squash Club is to have John and Pauline as members, and what a huge debt is owed to them for their invaluable contributions in establishing the Club as it is today.  Our past Honorary Treasurers include Tim Park who guided the Club through the financial intricacies associated with the 1990 project to provide Court 3, and Roy Squires who held the post from 1992 until his recent retirement.

The Club has and continues to boast a succession of renowned players. To John and Pauline are added the names of their sons Simon and Kevin, Laura Hill, Paul Hargrave, Lesley Sturgess who continues to have a very active role in the Club as coach, Gail Winfield, Stuart Maclean, Phil Shaw-Hamilton, Greg Loach, Millie Tomlinson and any more too numerous to mention.  Then there are the Club’s significant achievements in what was originally the NSL, and its successor the PSL. Under the guidance and shrewd manager-ship initially of Brian Hargrave, who was also prominent in the management of the NSL, and later Felix Frixou, the Club were Champions five times.  Past players representing the Club reads like the whose who of the top squash players over the past two  decades – Nick Matthew, Cassie Jackman, Laura Massaro, Lee Beachill, James Wilstrop, David Pearson, Marcus Berrett, Derek Ryan, Peter Marshall to name just some – and always so excellently supported by our home grown talent in the likes of Paul Hargrave, Kevin White, Laura Hill and Millie Tomlinson.

Throughout it’s history the Club has benefited from a strong voluntary input from members, very often above and beyond the call of duty, which continues today, and which forms such an important past of the ethos of the club. Those who have served on earlier Committees, our past House Manager and chairman Dick Smith, Pat Strutt, Eileen Sturgess, Peter Ashworth and Derek Latham, Brian Legg for the numerous roles he has undertaken, our  present House team managed by Phill Harrison with particular mention of Mike Robinson and Pete Dyson, and many others.  The present Committee, to whom I express my grateful thanks for their support and input, particularly our President Russell Moore, seeks to continue the best traditions of the Club, to maintain its facilities to the high standards which have been set, to explore opportunities for development, and, of param 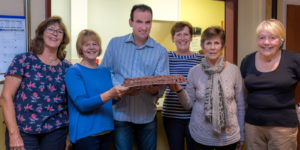 ount importance, to introduce the younger generation and encourage them to play squash and racketball which has given so much
enjoyment, and for some continues to do so. We are excited by the recent formation of a Junior Academy, the inspiration of Felix Frixou and managed by Dean Gregory, which we hope will go from strength to strength.

I end by repeating my apologies for any oversight of person or event in my attempt to précis the past 80 years. I am proud to be a member of such a fine club, and deem it a privilege to be with so many others of service to it.

Photos of the evening were taken by Ashley Frankin, and can be obtained here.